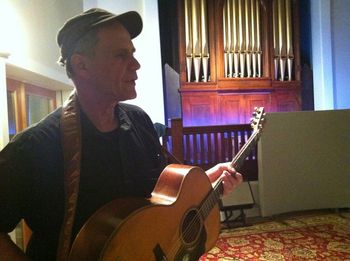 I got excited by music early, when a couple of older kids in my school started playing acoustic guitars. They must have been singing folk songs...we were all so innocent...or maybe just closer to a time when nations still had their tribal feathers. I was able to sneak into Greenwich Village as a young teen and hear Mississippi John Hurt play at the Gaslight  Some older friends in the area played bluegrass and I hung out in one old house with a banjo player named Clyde. There were antiques of wondrous beauty all over the house and one big downstairs bedroom with a giant old canopy bed and fine old instruments everywhere. When I went to Nova Scotia with George Dorian the summer after high school, I encountered the wild Northern music for the first time and it blew my mind. Later that year in Boston, I met a certain Marie Cameron from the Cape Breton Camerons and found myself back in Canada the following summer, and a long strange story that was, but I got to know Marie's brother, John Allen Cameron (the "Godfather of Canadian Celtic music"), sit around on the porch with him playing those jigs and reels with a frigging thumb pick. I went to more dances and did my actual first ever paying gig with John Allen and his brother John Donald. I played a fast reel on the harp and Donald Beaton Riley, as great a step dancer as ever I saw, jumped on stage and shuffled around like a Gaelic Bo Jangles and the crowd went bonkers. That was the first time I realized I could use the harp to generate the same kind of excitement that fiddlers can get out of a tune. Don Riley passed away long ago. He was an old man then, but he still could really move. His bronzed shoes are on display in the museum at the Canso Causeway and on his grave stone is inscribed "Lord of the Dance". It was hard to return to Harvard and be a student with all that music ringing in my ears, leaving Marie and my Canadian friends behind in a place that seemed to exist in another magical time.

At school I immersed myself in the study of poetry and history and started writing songs. Did some playing around in Cambridge. Revolution was in the air.....we thought.

Two years later I went across the country with George the fiddler, Uncle Marty the harmonica player and his dog Stoney, Walt Koken, the great old time  banjoist and Ricky Jay the magician, in the little bus driven by Billy B. We were The Busted Toe Mud Thumpers with Amazing Richard and his Magic Frog. I don't know why Ricky called himself Amazing Richard. Maybe he didn't want to tarnish his name by doing card tricks in bowling alley parking lots in Manetoba with an old time string band. Well now he's a Hollywood celebrity, so I guess he's redeemed himself.  I can say that traveling with a magician and a magic frog does does give one an advantage over your average band in a van. When at a border crossing into Canada, the authorities showed some reluctance to let us into the country, Ricky was able to make the station manager's keys disappear, thus leaving no doubt that he really was a magician. After that, any doubts about our general credibility were dispelled. We played a few tunes for the customs officials and went on our way. God, what a different world.

After college, I moved to Hartford to do some graduate studies and started playing gigs with Bill Walach and Will Welling. We played around the Northeast in colleges and bars mainly, doing a lot of my songs and mixing in some hard driving fiddle tunes. The music resonated with the post Woodstock "alternative" culture of the time, and we soon found ourselves making a living ...of sorts. Thus I began the slippery slide into the life of a musician. Coster Welling and Walach was the band...I know it sounds sort of like a law firm, but we did pretty well for a while.

After CWW, I started the group, Jacob's Reunion with Barbara Hyde, Yo Oxenhandler, Sandra Sayers and Rich Block. Yo's more classical and jazz background on violin and Barbara's very inspired piano playing added a new dimension to the mix of my songs and traditional music. We also had a great vocal blend between Sandy, Barbara and me. Our album sold really well really fast and to this day people still request it.

After JR I started focusing more on my songwriting career and in early 1980, released Old Stones, Broken Bones. This album featured some great players from my days in Hartford including Jeff Pevar and Preston Reed. The album was, I believe, the first record Jeff ever worked on. I moved to the Northampton Mass area about that time and started playing out as John Coster and the Medicine Band. John Hammond Sr., who was head of A&R at Columbia, liked Old Stones and eventually connected me to a producer, Al Shackman, who had moved to Northampton. In Al's studio I began the project which several studios and years later became the album Stories in the Dark, the album that featured the band from Northampton, Mass area, including singer Susannah Keith and guitarist  Ricky King, Chetz Keegan on bass and Dale Monette on Drums.

In the 90s I was living and working in New York where Susannah and I made several recordings, Dangerous Kingdom of the Heart, (re-released by Prime CD as Dangerous Kingdom, Susannah's album Torchlight, then in 2003 my album The World Has Changed. In New York we worked with my longtime friend, Jeff Pevar and a number of wonderful musicians including Richard Crooks, Shaun Pelton, Seth Farber, Mark Dann, Mark Epstein and Ronnie Gesser. By the time I was recording The World Has Changed up in Saratoga, the musical crew included also Tony Perrino, bassist Dave Livolsi and Dan Toler, the Allman Bros vet who stepped in when Jeff Pevar was off touring. Dan was a great musician and a wonderful fun guy to work with. He passed away recently.

I moved back to Massachusetts in 2004 and continued to perform and record, for a while working in a trio with Kate Taylor and Joel Zoss, but mainly playing solo with occasional support from some of the fine local players like Keyboardist Chris Haynes.  This time was punctuated by a freak accident which almost severed my right thumb and caused a hiatus in my guitar playing. Some very fine surgeons in Boston saved my thumb and my ability to play guitar, but during the months of healing, when I still could not hold a pick properly, I channeled my musical energy into exploring different kinds of harmonicas and the various ways I could use them, particularly in traditional tunes more often heard on the fiddle or flute. I found myself returning to the music I had heard and played most in my early days. joining some of the region's sessions, building my repertoire and connecting with other traditional players in New England. My accident was a strange blessing in disguise. I had played harp for years but never really learned many of the old tunes as a lead player.  Now I always want to mix some hard driving tunes with the songs. The pulse, the strong melodies that have been passed down for so long, the deep structures of old dance pieces, this is music that always makes me feel happier and stronger.

In 2012, I started recording some new material with the backing of Loudville Records. The project evolved into a compilation, Lost Horizon, a collection of 15 songs, five newer tunes from the last few years when I've been back in the Pioneer Valley and ten selections from earlier albums. Going back over these recordings I'm struck by how fortunate I've been to have such long musical friendships with so many great musicians. As a songwriter, I could not have found better support players, even if I had had an unlimited budget and major label backing. From the start, I've worked with people who've made important contributions to the roots music of our time. In 2012 I also got to work with old friend, Jeff Pevar, adding a tremolo harmonica part to one of the tracks on his great new instrumental CD, From the Core.  I'm looking forward to getting back out on the road this year and back into the studio where I hope to record some Instrumental pieces inspired by all the great Celtic sessions I've been part of these last few years.